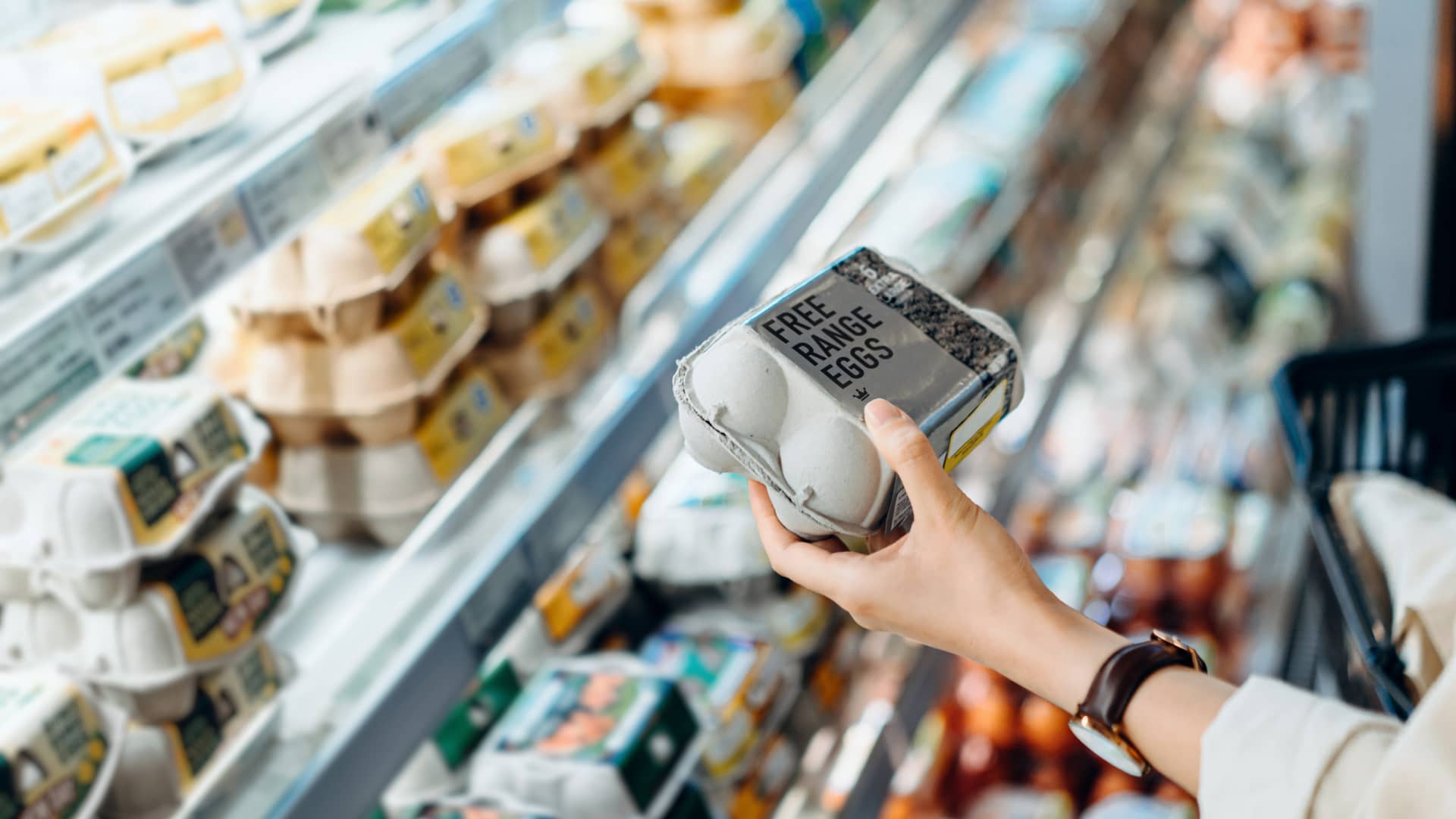 The surge in egg prices has stood out in a year when Americans saw their bills balloon across the grocery store.

Average egg prices jumped 49.1% in November compared with those a year earlier — the largest annual percentage increase among all grocery items in that period, according to the consumer price index, a barometer of inflation.

By comparison, the overarching “food at home” category was up 12%.

The increase is even more acute when measured by the cost of a dozen large, Grade A eggs, which more than doubled to $3.59 in November from $1.72 the year-earlier month, according to data from the Federal Reserve Bank of St. Louis.

Bird flu is largely to blame for rising egg prices

Those price dynamics are primarily due to the deadliest outbreak of bird flu in U.S. history, which has killed millions of egg-laying hens this year, according to economists.

“A lot of things are up since 2020,” Bill Lapp, president of Advanced Economic Solutions, a consulting firm specializing in food economics, previously told CNBC. “But the recent spike is extraordinary in the shell-egg as well as egg-product markets.”

About 57.8 million birds have been affected by avian flu in 2022, according to U.S. Department of Agriculture data as of Dec. 28. These figures include birds such as turkeys and ducks.

More from Personal Finance:
5 tips for reducing holiday season credit card balances
New ways to avoid a tax penalty for early IRA withdrawals
Who will lose out most if student loan forgiveness falls through

Bird flu is relatively rare in the U.S. The last bout was in 2015, when 50.5 million birds — the previous record — were affected, according to the Centers for Disease Control and Prevention.

The flu hadn’t emerged in at least a decade or two prior to that, Lapp said.

Here’s why this matters: Avian flu is “highly contagious,” the New Jersey Department of Agriculture said in October. It’s also extremely lethal: It kills 90% to 100% of chickens, often within 48 hours, according to the CDC.

Farmers generally must kill their remaining birds — not by choice but due to federal rules meant to prevent spread, Brian Moscogiuri, a global trade strategist at Eggs Unlimited, an egg supplier based in Irvine, California, previously told CNBC.

About 40 million egg-laying hens — “layers,” in industry shorthand — have died this year due to avian flu, Moscogiuri said. There were 375 million total layers in the U.S. as of Dec. 1, which is down 5% from last year, according to the USDA.

Egg quantity has declined in lockstep. About 8.9 billion eggs were produced in November, down from 9.7 billion in December 2021, according to USDA data issued Dec. 20.

“It’s kind of happenstance that inflation is going on [more broadly] during the same period,” he added.

Price pressures may be easing

Bird flu typically arrives during the spring migration and disappears by the summer, experts said. But this year was different; the virus reemerged in September.

In October, the USDA revised its production forecast for table eggs downward for 2023 and the remainder of 2022 following “September detections” of bird flu.

Consumer demand for eggs has also been buoyed by a pivot away from some higher-cost proteins amid broader food inflation, the USDA suggested in an October outlook report.

Egg prices jumped 2.3% just in the month of November, and by 10.1% in October, according to the CPI.

Elevated egg prices “could last into the first quarter of 2023,” Lapp said.

But price pressures appear to be easing, according to Moscogiuri. That’s partly a seasonal effect, as demand naturally lets up after the holidays. It’s also due to record egg prices somewhat dampening demand, he said.

“The market has now topped and spot prices are becoming increasingly negotiable,” Moscogiuri said. “As the spot price falls, the market will follow and we will likely see a 25%-30% correction from current all-time highs.

“This adjustment will likely take place over the next three weeks.” Any additional, large outbreaks of bird flu could disrupt this trend, he added.

Meanwhile, chicken prices have been falling

Perhaps counterintuitively, chicken prices have been declining in recent months, moving opposite those of eggs.

Chicken prices retreated in October and November, falling by 1.3% and 0.8%, respectively, according to CPI data.

Chickens raised for meat consumption — known as “broilers” — aren’t affected by avian flu to the same extent as the “layers.”

The life cycle of a broiler is much shorter — anywhere from 5.5 weeks to nine weeks, from hatch to slaughter, according to Vencomatic Group, a poultry consulting firm.

That cycle can be upwards of 100 weeks for an egg-laying hen, Moscogiuri said. It can take about five to six months for layers just to reach full productivity, according to the USDA. The latter are therefore more susceptible to bird flu since farmers must keep them alive for longer, experts said.

Broiler quantity is also up, contributing to lower chicken prices at the grocery store.

For example, about 851 million broiler chicks hatched in October — up 5% from the prior year, the USDA said. The number in August (865 million) broke a monthly record, which had previously been set in March 2020.

Broiler “production” (measured by total pounds of meat) will rise 2% in 2023 relative to 2022, according to government data.

Despite the recent retreat, chicken prices are still up 12% compared with October 2021, according to the CPI. Higher prices for commodities such as corn and soybeans — the primary ingredients in chicken feed — have likely contributed to inflation for chicken, as well as eggs. Higher annual energy prices also factor into elevated costs for food distribution, for example.